I watched a movie this passed weekend. I know. Not the most exciting thing, but dammit diary, I got such a rush! I can’t remember the last time I had time to myself. To have the house quiet all by myself to do whatever I wanted. For just a few hours anyway…
And so I sat there on a Saturday night, in total darkness except for the Tv light that illuminated the living room. You see, I had sent the boys to sleep early this time. It was a plan I had orchestrated the day before and I was determined to follow it through. Lately I’ve been feeling like I’m missing out on something. This weekend I think I cracked it. Alone time. Now don’t get me wrong diary, I love the family time I share with my boys but a girl also needs her own time and space to…well, be a girl. To get lost in a romantic movie instead of watching Kung Fu Panda, Penguins Of Madagascar and Dora The Explorer.

As I watched Gone Girl- a movie I recommend by the way but with caution due to it’s twisted story line- I began to appreciate the power of a good movie. Even posted something on twitter late as it was: 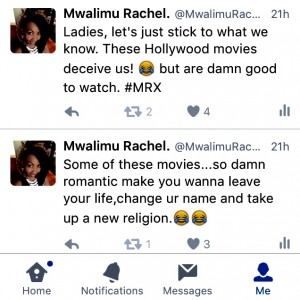 The more I watched this movie – ( and I can bet good money that I was the last one to do so) , the more I wanted to go on and on. I mean why stop now diary? The feeling was just too good to stop. No pressure, no stress, no expectations, just a girl in her fantasy world and a movie. Then there was this other movie I watched based on a book… of a certain handsome guy who likes bondage. He wasn’t 50 neither did he like wearing shades of grey colour. Follow my drift?*Giggles*. And after that movie came to an end, I popped in a series that had been collecting dust in the house- SATISFACTION. Now this series I highly recommend for married folks. Oh then again maybe in my excitement of “reckless freedom” I read too much into this series. Whatever diary, I don’t care. Same way I didn’t care when I realized it was 6A.M and I was still watching TV. Before long, my son would be calling me to get him breakfast, I would return to house chores and routine and my wild night would be over. Beauty about it though diary? There’s always this coming weekend God willing and this time around, I plan on spicing things up a little bit. Maybe throw in some wine and cheese? LOL. Exciting!

I love my simple pleasures. They keep me sane in this fast world I live in. What is your simple pleasure? Please do let me know in the comments box below 🙂 Be sure to be logged on to Facebook first.